Monster in My Pocket Wiki
Register
Don't have an account?
Sign In
Advertisement
in: Monsters, Series 1, 25 Points,
and 7 more

Behemoth is monster #4 from Series 1.

Behemoth is a twenty-five point monster and is available in purple and green, and the later neon green, neon red, neon yellow and violet re-release colours. It was also one of the monsters included in the board game, in an exclusive pine green colour. The Behemoth figurine appears as a bipedal creature with a scaled skin detail, with a large head and protruding tusks. Most, but not all, traditional renderings of Behemoth show it as a quadruped, and it is always described as having a tail, which the figure lacks.

Species: Giant herbivore
Born: Between the I and the XII century A.C.
Habitat: African desert

Behemoth, called "the king of animals" seems like a gigantic hippo. He spends his days feeding himself. When he's hungry he is capable of scooping out a fruit and vegetables shop in a blink of an eye and when he is thirsty he's capable to drain a lake in one sip. This appetite have already caused famine and drought all over the world. Although this monster does not devour people (he is a convinced vegetarian) his strength is so much, he can cut down an army in one backlash. Then, if you ever hear a gurgling, pray that is your stomach and not Behemoth.

Behemoth appears briefly on Monster Mountain after Vampire and Warlock assemble as many monsters as they can. It is unknown which leader Behemoth sided with, as he does not appear beyond the first issue.

Behemoth appears in Stage 6, in the elevator before the boss rush. Despite the implied claim of the manual, the Behemoth is destroyed in one hit.

The description of Behemoth in the manual reads: "An enemy with lots of body."

In the cancelled animated series, The Quest, Behemoth was scheduled to appear in episode four, "Quest for the Behemoth's Pearl." 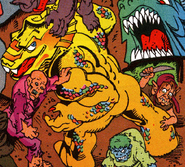