Monster in My Pocket Wiki
Register
Don't have an account?
Sign In
Advertisement
in: Series 3, 25 Points, Humans,
and 3 more

Blemmyae is monster number 81, and is considered part of Series 3. The figure was only available as a premium freebie packaged with the Konami Video Game. It was available in all four standard Series 3 colours (neon green, orange, pink and blue), and had a points value of twenty-five.

Legend of the Blemmyae

The Blemmyae or Blemmyes were a genuine race of people, a tribe of nomadic Nubians living in the north of Africa. Tall tales from travellers that reached back to the Roman Empire exaggerated them into a race of monsters. They were described as having no head, merely a space upon their shoulders - and were thus also known as Acephalos - meaning 'no head.'. Instead, the Blemmyae had their faces in their chests. Tales of the real Blemmyae hoisting their shoulders unusually high may have been the inspiration for these stories. Beyond this deformity, the Blemmyae were described as entirely human. Later tales mixed the Blemmyae in with the terrible Anthropophagi - meaning 'man eaters' - monstrous cannibals said to roam in a variety of locations in Africa and Asia. Thus, the Blemmyae became known as cannibalistic monsters.

"To the west of Caroli are divers nations of Cannibals, and of those Ewaipanoma without heads." ---Sir Walter Raleigh, The Discovery of Guiana

Many travellers in the Middle Ages, such as Marco Polo and Sir John Mandeville, perpetuated such myths, peopling their tales with a variety of bizarre races. As well as the Blemmyae, such abnormal men as the dog-headed Cynocephali, the huge-eared Panotii, the tailed men of the Indies, mouthless Astomi from India and the one-legged Sciapod race were said to populate the Earth.

The Monster in My Pocket figure corresponds well to the legendary description of the Blemmye, although the name given, Blemmyae, is in fact the plural form. Some materials also spell it 'Blemmya.' The monster took centre stage on the packaging of the Konami game, and was depicted with green skin. The original artwork, later released in sticker and card form, however, gave him a more plausible bronze colour.

This terrible beast has no head. His mouth, eyes and nose are in his chest. He always carries a knife made of gold that has the power to destroy any living creature. Generally they will be accompanied by a terrible sandstorm. If he attacks you, get into a lake or river because this monster can not keep their heads above the water! 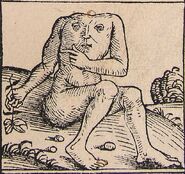