Certain monsters from Series 1 and Series 2 were released as glow-in-the-dark premiums, made from off-white rubber infused with a phosphorescent pigment. These figurines glowed with a  greenish light. Known monsters released in this form include Bloody Bones, Cerberus, Dryad, Elbow Witch, Ghost and Undine. Two unique items were off-white glow-in-the-dark moulds of Ancient Gorgon and Ectoplasmic Phantom which featured painted black facial details. These are the only known items from the first three series which feature any painted details.

Additionally, the top six monsters from Series 4 - the 100-point Super Scaries - were made from yellow or green phosphorescent rubber, with painted details. These tended to give off a rather dimmer glow than the off-white figurines. 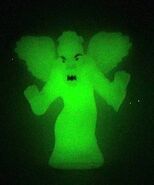