Monster in My Pocket Wiki
Register
Don't have an account?
Sign In
Advertisement
in: Monsters, Series 1, 15 Points,
and 10 more

Harpy is a fifteen point monster that comes in purple and olive in the original colors, and all four of the neon colors. She is depicted as a woman with a bird-like nose, a snake body, and wings.

Habitat: An isolated island in the Mediterranean Sea

Possibly the most repulsive creature ever, the Harpy is a winged monster with the head of a young woman, and the body, wings and feet of a bird of prey. It has no regard for personal hygiene and an appetite that won't quit. The Harpy will strike at dinnertime, stealing all of the food before anyone else can eat. Its disgusting table manners include burping, chewing with an open mouth, not asking to be excused and then flying away with a hideous scream as it throws up on everyone! The Harpy will sometimes attack and eat humans - usually criminals and dead people. This beast dislikes the sounds of brass instruments (such as tubas) and can be repelled by the playing of band music just before dinnertime. 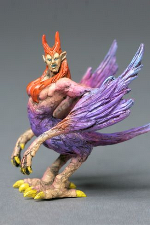 Harpy is a monster in the class "The Winged." She is monster #20. Harpy appears as a ugly redheaded woman with an avian body. Unlike her Series 1 counterpart, this Harpy does not have any serpentine features. Her trading card points are worth 157.

The Harpy is a shrieking horror with the head of a human female and the body, claws, and wings of a giant bird of prey. With a foul smell and an awful scream, Harpies usually attack in threes... they swoop down, steal food, and fly away. Then, from above, they vomit all over their helpless victims.

Harpy appears very briefly in the first issue alongside several other monsters on Monster Mountain.

Harpy appears as an enemy monster in the Monster in My Pocket video game, in the construction area (Stage 4, Area 1). The harpies fly down in groups of three and attacks the player, but are easily destroyed.

The instructions manual entry for Harpy reads: "A triple threat with sharp talons."