Hunchback is monster #48 from Series 1.

Hunchback comes in all four colors, as well as all four neon colors. Hunchback is a 5-point monster.

Habitat: In the bell towers of French cathedrals

Born with one leg shorter than the other and one eye swollen shut, Hunchback was cruelly abandoned in a church by his parents and raised by a priest. Unfortunately, he grew uglier with age - a large wart appeared over his good eye, his uneven teeth grew over his lip and as a result of not sitting up straight at the dinner table, he developed his trademark hunchback. He later became deaf from ringing the bells in the cathedral. Not a terribly popular fellow, he was befriended by a Gypsy dancer. Sadly, she was later executed for a crime she didn't commit. Hunchback murdered her accusers and retreated to the bell tower where he pours hot lead on top of anyone who approaches. (His younger brother turned out to be a great football player - the halfback of Notre Dame!)

Hunchback appears as an enemy monster in the Monster in My Pocket video game. They are found jumping around at the player in Area 1 of Stage 1.

The description of Hunchback in the instructions manual reads: "Bounces around with great unpredictability." 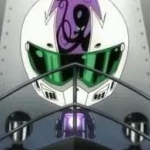