Monster in My Pocket Wiki
Register
Don't have an account?
Sign In
Advertisement
in: Monsters, Series 1, 25 Points,
and 12 more

Hydra is available in original green and purple colors, as well as all four neon colors and a rarer premium orange edition. There is one centered head, while four others sprout out on each of it's sides. The Hydra also has wings, although the myth has never hinted towards the creature flying.

The multi-headed Hydra is one of the most invincible monsters of all times. This flying fiend has nine - count 'em - nine dragonlike heads. If one is cut off, two heads will grow in its place. And Hydra's breath is so deadly it makes the Los Angeles smog seem refreshing! A quick huff and a puff by this monster will do more than blow your house down. He can poison waters and turn lush-green fields brown. Since an industrial strength breath mint has not yet been invented for this beast, your best bet is to stay clear of the Lake Lerna swamp to avoid becoming "Hydra Hamburger!" 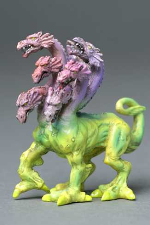 Hydra is a monster in the class "The Ancients." It is monster #13. Hydra in the 2006 remake had a very different appearance, as it now had a lime green dragon-like body, with 7 purple head stacked vertically on the front. Instead of 10 heads, Hydra now has 7.

Hydra is a giant swamp creature with a dragon's body and several serpent's heads. When one of the heads is cut off, two more grow back in its place. All of Hydra's heads must be cut off before he's beaten. The stench from the Hydra's breath is enough to kill man or beast.

Hydra appears as an enemy monster in the Monster in My Pocket video game. Found on the street (Stage 3, Area 1), Hydras blast the player and swarm around them.

The description of Hydra in the instructions manual reads: "You won't be laughing when you get a wiff of his gas."