Jabberwock is monster #50 from the Series 2 figures, with a points value of thirty. It was available in all four neon colours, green and roange being more common than blue and pink, and took it's appearance from the classic Jabberwock image by John Tenniel.

Jabberwocky is a classically structured nonsense poem, written by Lewis Carroll in 1872, and originally published as part of his novel Through the Looking Glass, and What Alice Found There.

The poem was written during Lewis Carroll's stay with relatives at Whitburn, near Sunderland, although the first stanza was written in Croft on Tees, close to nearby Darlington, where Carroll lived as a boy. The story may have been inspired by the local Sunderland area legend of the Lambton Worm, as noted in "A Town Like Alice's" by Michael Bute (1997 Heritage Publications, Sunderland) and as later adapted in "Alice in Sunderland" by Brian Talbot. Roger Lancelyn Green, in the Times Literary Supplement (March 1, 1957), and later in The Lewis Carroll Handbook (1962), suggests that the rest of the poem may have been inspired by an old German ballad, "The Shepherd of the Giant Mountains". In this epic poem, "a young shepherd slays a monstrous Griffin". It was translated into English by Lewis Carroll's relative Menella Bute Smedley in 1846, many years before the appearance of the Alice books. English computer scientist and historian Sean B. Palmer notes a possible Shakespearean source. The inspiration for the Jabberwock allegedly came from a tree in the gardens of Christ Church, Oxford, where Carroll was a mathematician under his right name of Charles Lutwidge Dodgson. The tree in question is large and ancient with many sprawling, twisted branches somewhat suggestive of tentacles, or of the Hydra of Greek mythology.

The monster is called the Jabberwock in the body of the poem, and Jabberwocky in the title. The spelling 'Jabborwock' does not appear, but has nonetheless come into usage as an alternative spelling - this spelling is occasionally used in MIMP materials. There is little description of the monster, and virtually none that makes sense. Although readers therefore have freedom to imagine the Jabberwock however they wish, the classic rendering of the creature by John Tenniel has become almost universally associated with the monster. This image of the beast gives it the appearance of a dragon, with small wings, a long neck and buck teeth. It wears only a waistcoat. Other, equally mysterious creatures mentioned in the poem include the Jubjub bird, the mome rath, the slithy tove and the frumious bandersnatch.

Is said it has long tentacle-like arms that end in sharp claws. Has a rat tail and bat wings. It also has a long neck, lacks nose and eyes made of fire. Hiddes behind the trees and makes a sound like witches before attacking its victims.

'Twas brillig, and the slithy toves

Did gyre and gimble in the wabe; All mimsy were the borogoves, And the mome raths outgrabe.

"Beware the Jabberwock, my son! The jaws that bite, the claws that catch! Beware the Jubjub bird, and shun The frumious Bandersnatch!"

He took his vorpal sword in hand: Long time the manxome foe he sought— So rested he by the Tumtum tree, And stood awhile in thought.

And as in uffish thought he stood, The Jabberwock, with eyes of flame, Came whiffling through the tulgey wood, And burbled as it came!

One, two! One, two! and through and through The vorpal blade went snicker-snack! He left it dead, and with its head He went galumphing back.

"And hast thou slain the Jabberwock? Come to my arms, my beamish boy! O frabjous day! Callooh! Callay!" He chortled in his joy.

'Twas brillig, and the slithy toves Did gyre and gimble in the wabe; All mimsy were the borogoves, And the mome raths outgrabe.

The Jabberwock has entered into English folklore, and has been the inspiration of numerous similar stories, perpetuating the monster-slaying tradition on which it drew. Numerous works, both directly related to the works of Carroll and otherwise, have featured the monster itself. These include, but are not limited to:

In 1977, Terry Gilliam directed a movie called Jabberwocky. A poster for the movie featured a coloured version of Tenniel's Jabberwocky illustration, and the first stanza of the poem is recited at the start of the film. The movie's plot very loosely resembles that of the poem.

In 1986 an episode of The Real Ghostbustersentitled "The Grundel" featured a Jabberwocky-like Ghost while the 'busters themselves recited part of the poem as they captured it. Again, this Jabberwock resembles the Tenniel version.

Mr T provided the voice for the Jabberwock in the 1987 animated TV film adaptation of "Alice Through the Looking Glass".

In Syfy's 2009 Alice (TV Miniseries) a CGI version based on John Tenniel's illustration attacks Alice and the Mad Hatter.

In the Tim Burton film Alice in Wonderland (2010), Christopher Lee voices The Jabberwock (once again heavily influenced by the Tenniel illustration). The Jubjub Bird and the Bandersnatch also appear in the film computer-animated. Alice also sets out to find the Vorpal Sword. Also, the Mad Hatter (Johnny Depp) recites the poem to Alice during the film.

The Jabberwock is a monster in the D&D parody "Munchkin." The vorpal blade is also included with the description "+10 to anything beginning with the letter 'J.' Don't ask why. Don't ask what 'vorpal' means either."

The Jabberwock appears as a boss in the Super Nintendo video game Secret of Mana. In the game it is depicted as a two-headed dragon.

The Jabberwock is a monster from Final Fantasy IX. It resembles a small reptilian dragon with a fish-like face, and holds a book. There is also an alternate purple version as part of the 'spirits of Gaia' sub-quest. Also the Bandersnatch is present as well, as a large dog-like creature with a spiralled tail, apparently capable of 'biting heads off'. 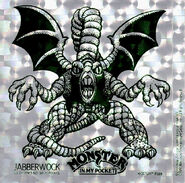 Add a photo to this gallery
Retrieved from "https://monsterinmypocket.fandom.com/wiki/Jabberwock?oldid=7216"
Community content is available under CC-BY-SA unless otherwise noted.