Monster in My Pocket Wiki
Register
Don't have an account?
Sign In
Advertisement
in: Stubs, Monsters, Series 1,
and 12 more

View source
This article is a stub.
You can help the Monster in My Pocket Wiki by expanding it.

Kali is depicted as a monstrous four-armed woman with fangs. Controversy surrounded this monster in the United Kingdom, with many decrying the use of a Hindu deity as a "monster". This led Kali being recalled by Morrison Entertainment Group, making her one of the more uncommon monsters in the series.

Habitat: The Jungles of India

This humanoid hag from India is really just an ugly mother who loves her children - loves them to death, that is! After working up an appetite performing her famous "Dance of Death" she heads home to eat her children, or anyone else she can strangle with her iron hook. This "bad luck beauty" has dark skin which she sheds like a snake, and red hands on each of her four arms. Kali wears a necklace of human teeth and a belt made from shrunken blood-stained hands. Fortunately her taste in jewelry has yet to catch on!"

Kali, now renamed as 6-Armed Sorceress (to avoid controversy) is a monster in the class "The Ancients." She is monster #16. Despite the name change and the extra set of arms, this female warrior has clearly been inspired by Kali with her blue skin and Hindu outfit. Her trading card points are worth 201.

This exotic-looking, 7 foot tall female warrior is known for both her creative and destructive powers. She has six arms, which make her terrific at multi-tasking, but you wouldn't want to run into her in a dark alley at night.

Kali is one of the many monsters on Monster Mountain in the first issue, attending the Assembly of Monsters held by Vampire and Warlock. Although she is never seen in the series again, it is likely she joined forces with Warlock.

Kali appears at the end of Stage 4, Area 1, guarding the platforms to jump to the area exit. She will periodically throw a grappling hook, and takes three hits to down.

Her entry in the instructions manual reads: "When she reaches the end of her rope, you'll get the hook." 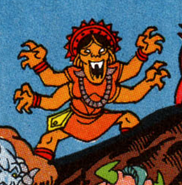 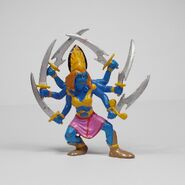 - The background photo for the trading card of 6-Armed Sorceress is actually the Taj Mahal.

- Also on the 2006 trading card, there is a typo. The last sentence reads: "but you wouldn't want to run into her in a dark alley at night." On the cards, the words run and into are placed together as "runinto" which is not a real word.