Monster in My Pocket Wiki
Register
Don't have an account?
Sign In
Advertisement
in: Monsters, Series 1, 10 Points,
and 12 more

One of the franchise's primary antagonists, Medusa has appeared in multiple incarnations of the series's storyline. She is the only monster to be portrayed as villainous in each of her appearances.

Medusa comes in all four colors, as well as all four neon colors. She also appears in both Peru series. A ten-point monster, Medusa is depicted in a seductive stance, much like Vampiress.

Species: Reptilian/Humanoid
Born: 4000 years ago in Greece
Size: 5 foot 2 inches, Eyes of Blue
Habitat: Lives in a cave on the farthest shore of Oceanus

The monster Medusa once led a charmed life as a beautiful woman with golden blonde hair (she was Miss Greece of 1991 B.C.) One day she betrayed the goddess, Athena, who then changed Medusa into a hideous creature. Her golden locks were replaced with slithering, poisonous snakes. Her hands were turned to bronze and frozen in the shape of vulture's talons. And worst of all, any man she looked at would be turned to stone! Understandably, her social life went downhill fast, and she left to live in a remote cave. She has since created many of the world's finest statues by simply giving famous people the "evil eye!" 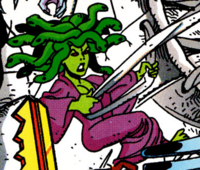 In the Monster in My Pocket comic series, Medusa is a member of the evil monsters, and possible romantic interest for Warlock. She and Spring-Heeled Jack are Warlock's most prominent allies. She is first found by Warlock in Greece, who invites her to be his ally. She wears a veil during the meeting at Monster Mountain, but after the monsters are shrunk down, Medusa no longer wears the veil, as her powers have been degraded.

Medusa had the ability to transform any living creature who looked into her eyes to stone. Because of this, she wore a veil during the monster assembly on Monster Mountain. However, when she was shrunk down to one-inch, Medusa's abilities were reduced to "barely cause a bit of arthritis."

Medusa appears as a boss monster in the Monster in My Pocket video game. The player battles her in the second-to-last level, at the Oriental Room. During the battle, Medusa flies down with several illusions, and the player must strike the real one in order to harm her. She also has the ability to blast paralyzing beams from her eyes. After she is disposed of the first time, she returns in Monster Mountain, and attacks the player once again.

Her description in the instructions manual reads: "She'll give you a light, alright. A paralyzing beam of light, in fact."

Medusa appeared as an evil monster once again in the animated special The Big Scream, voiced by B.J. Ward. Along with Vampire and Swamp Beast, Medusa was shrunk down to miniature size and sought out a cure. After discovering screams turn the trio large again, Medusa and the others attempted to steal a movie with a screaming woman in it. However, their plan was foiled by the good monsters, despite Medusa turning Wolfmon to stone.

Medusa had the ability to transform any living person into stone. However, this effect was typically temporary, especially when she was in miniaturized form.

Medusa appeared as a singer in the song Can't Do A Thing With My Hair on the audio cassette Monster Rock. She was also mentioned throughout several songs and had a speaking role in Monster in My Pocket.

The description for Medusa includes a backstory similar to her Greek Mythology counterpart. Before Medusa was a monster, she was a beautiful blonde woman beloved by all of Greece. However, the goddess Minerva heard Medusa boasting of her beauty and was offended. She transformed Medusa's beautiful curls into a tangle of poisonous snakes. Not fully content, Minerva also cursed Medusa with a deadly gaze. Whenever she glanced at a man, the man was transformed into a statue. Thus, Medusa became the largest collector of statues in the world.