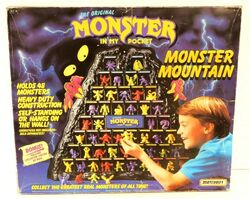 Monster Mountain is the mountain used in the Monster in My Pocket video game, Monster in My Pocket comic books, and The Big Scream animated special. In the video game, Monster Mountain is Warlock's headquarters, which houses the evil monsters. In the comic books, Vampire and Warlock, along with the monsters they've allied themselves with, hold a meeting at the mountain. Warlock's scheme shrinks all of the monsters on the mountain down to a few inches, forcing them to get lost. The Big Scream mentions the mountain briefly as a prison, which vampire , Medusa, and Swamp Beast are captives in. However, vampire's plan shrinks them here, also, and they get swept away to California.