Monster in My Pocket Wiki
Register
Don't have an account?
Sign In
Advertisement
in: Series pages, 2006 remake, Media,
and 2 more

View source
watch 01:36
We're Getting Mutants in the MCU - The Loop
Do you like this video?
Play Sound

The latest series of Monster in My Pocket, the 2006 relaunch series. This new series featured 48 redesigned monsters, now produced as highly detailed figurines with fully detailed painted finishes. While the majority of the remade monsters were from Series 1, there were also quite a few from Series 2, Series 3, and the Super Scary lines. The figures dispensed with the traditional points value scheme - they had no points value stamped onto them, although a total points value could be found on each monster's respective collectable Game Card. However, a secret bonus points value could be found on each by use of the decoder light, which used a UV beam to illuminate invisible ink. This bonus value was for use in the card game. The monsters were also now organised into groups based on shared characteristics. The series was created by MEG, and distributed in the UK and Ireland by Corinthian Plc, by MEG in Australia and New Zealand, and by DTC in Brazil. The distribution of the figures was no longer in any way random - all packaging variations were predetermined. The figures come in four packs (six variations), three-packs with decoder lights (four variations), single packs with decoder lights (four variations) and with various playsets, including a Haunted Mountain, a Monster Showdown playset and a Skull Carrying Case.

Although the UK line was released as a full set of 48 monsters, three, Phantom, Grim Watcher and Ghost, were never released to UK markets. In Australia, the series was split into Series One and Series Two, each comprising 24 monsters (Series One featured the groups the Ancients, the Humanoids, the Beasts and the Winged, Series Two the remaining four groups). In Brazil, the series was marketed as Galerias de Monstros, also split into two series. As well as four packs, the Brazilian market also featured single toy packets. The company no longer has distribution rights to the series. Although the monsters were not numbered on the figures or on the collector's leaflets, they were numbered on the game cards. The game cards reverse repeated the numbering in the format ###/230, indicated that a much larger range of monsters may have been originally planned. Some indication of further monsters produced to prototype standards exists. Some monsters were released with slight naming variations depending on packaging and marketing area.

The countries confirmed to sell the 2006 line were: United Kingdom, Australia, South Africa, Brazil and Peru.

Along with the July 2006 release, a confectionery line that would also contain another 36 monsters was going to be released in August 2006, but this never came to fruition. All 48 monsters are labelled in advertising as "Series 1." This possibly explains the numbers on the card reading ###/230, as MEG was likely going to make more series in the 2006 line until there was potentially 230 monsters. The newly redesigned monsters were given a full detail and color paint to them unlike the single color of the original series. The designs were based on more modern but sometimes traditional interpretations of the monsters (i.e despite usually being described as a colossal squid monster, Kraken was designed more closely to its description and likeness in Greek mythology.) Unlike the UK markets, the exclusive figures were not sold in playsets outside the country, all the figures were sold in regular packets of 2,3 and 4 monsters.

Despite not being released to UK markets, Ghost, Phantom and Grim Watcher were sold along with other mainline monsters when the line was brought to Australia, Brazil, New Zealand and South Africa. They were not released in the UK and Ireland because MEG was going to make another product (likely another playset) that would contain the 3 figures but the product was cancelled as the line was being discontinued in the UK and were now focusing on selling the series to a more broader range of markets.

(Acknowledgements to Toypedia for a wealth of information.)

The figures for the relaunch are as follows:

Monsters and creatures that are of the bog-standard category, usually being grotesque, powerful and hideously monstrous, some having little to no human resemblance at all.

Monsters and creatures that have a very human origin, have a human-like appearance, or can switch between a human and monster form.

Monsters and creatures that are mostly based in ancient mythology, stories and details of whom have been around for thousands of years.

Monsters and creatures that are of avian nature, having wings or being air based.

Monsters and creatures that have gained abilities over time or through other monsters, were outcasted from society, or those who have some human origin but have deranged physically/mentally into a monstrous body and mind.

Monsters and creatures that have died, and their bodies have been reanimated. Some of these haven't died already but are of undead morality - being dead forever as they were never born in the first place.

Monsters and creatures that are dead but exist in a spiritual form, or monsters that were born as ghosts. Some of these monsters are not classed as dead, but their physical body doesn't walk this world anymore.

Monsters and creatures that are aquatic and roam in the sea, or are water based.

As mentioned above, the monsters this time were sold in predetermined packs, they were not randomised in any way. While the series 1 of the 2006 line had quite a few variations of monster packs, the series 2 did not. Here are some of the confirmed UK variations.

This section does not apply to packs made outside the UK.

The 2006 series had 5 different decoder lights that came bundled with the monsters in the series' second batch of monsters. They were only released in the UK as the releases in other countries came with different packaging and accessories. Like mentioned above, the decoder lights would use a UV beam to highlight hidden bonus points painted onto the monsters for the playing card game. The following lights were:

Only sold in UK stores, this playset is very reminiscent of the original Series 1 Monster Mountain display case. However, instead of having designated slots for each monster, the 2nd Gen version was more of a playset to place monsters and play around with it. It's made in the style of a skull, with wooden doors that swing open. When battery powered, red lights and creepy sounds would play if someone would press the button on top. There is also a lever that collapses the stairs when pushed. This playset was the only package to include Vampiress and Poltergeist in the UK, but like all playsets, this item wasn't available in other countries.

This playset was a very efficient portable way of storing monsters and displaying them. It came with Zombie in the UK with the snake decoder light. It had 3 shelves with red LED lights that glowed like the haunted mountain playset, also made in the style of a skull. This playset also came with a bundle of 24 cards.

The monster showdown playset included the Grim Reaper and Mummy, with the eyeball decoder light, and also a bundle of 24 cards too. It has a thin plastic platform that has stands for the cards and monsters you would want to battle.

The release of the series in other countries had different accessories. There was 3 "action accessories" that would sling and catapult monsters when placed on them. Brazil had single pack monsters that would be random when opened. On the series 1 pack, official art for the Jimmy Squarefoot prototype can be seen.

Just like the 90s series of Monster in My Pocket, the 2006 line wasn't without prototypes, with some being released to the market very early. the most famous one is a 4-pack including Red Cap, Vampire, Haniver and Griffin, however a few more are known to exist. In the aforementioned pack, the prototype version of Haniver and Griffin are inside. These versions are slightly different to the final, the difference being a slightly different paint job and plastic mould. The prototype pack uses a different art style, and packaging information. Why these prototype packs were even released to the market is unknown, but it may had to do with the preparation of the series as at the time MEG was just about to release both series of the 2006 line at the same time, and also had to further prepare the sale in other countries.

On the promotional image for the 2006 line, an unidentified green and pink monster can be seen in the background. Long thought to have been Swamp Beast or Hobgoblin, it has been confirmed to have been a prototype version of Jimmy Squarefoot. To record, no other photos of this prototype figure have ever been found.

While there has been rumours of there being prototypes for Vampire and Cockatrice, this hasn't been confirmed yet.

The first ever "playset" made for the 2006 series actually dates back to the start with a scrapped item called "The Cave." The only known proof of this product is an display for it on the back of the prototype packs. According to the description, it was a dark display case big enough to fit one monster and it would use a UV light to reveal hidden bonus points, much like the decoder lights. This item was most likely scrapped because it was replaced by the more practical and efficient use of smaller handheld decoder lights.

The prototype cards were, like the prototype figures, the earliest versions of the playing cards. However, only 4 have ever been found to record. They include Cyclops, Centaur, Cerberus and Bigfoot. Centaur is the only one that has been seen in full detail on the internet.

To promote the release of the series, MEG made a interactive flash website on their website in July 2006. It included a list of all the monsters, monster biographies, downloadable wallpapers, TV commercials and a where-to-buy page and contact page. Since Adobe Flash shut down in 2021, the website no longer works, however with the Wayback Machine website, screenshots of it can still be seen. 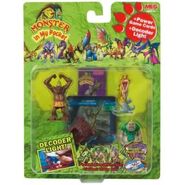 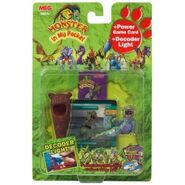 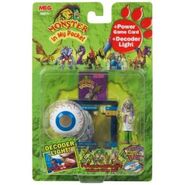 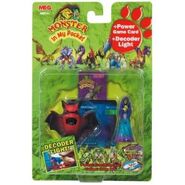 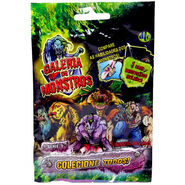