Monster in My Pocket Wiki
Register
Don't have an account?
Sign In
Advertisement
in: Series 3, 25 Points, Demons,
and 7 more

Orobas is monster #78 from the Series 3 figures. It was available in all four Series 3 colours, and had a points value of 25.

A prince of Hell, Orobas commands 20 legions of demons. He is able to take the form of either a beautiful horse or a man, up to the discretion of the person who summoned him. He is an honest demon, willing to tell truths to anyone who wishes to hear them, and can easily discover falsehoods. He does not deceive his conjurer, and knows everything from the past to the future. Orobas is identified as a Goetic demon in the Lesser Key of Solomon

Orobas is a twenty-five point monster, depicted much like an early woodcut of Orobas, in the same stance and with similar attributes. He's the only one in 3rd serie that comes in just 4 colors From Shreddies Cereals and is not available in 4 Big Boy's colours.

Habitat: He lives in a greek mountain (sometimes in the hippodrome)

He is powerful and attractive. Is part man, part horse. He can predict the future which is why he's always surrounded by people who wants to know what the future holds for them. He can also know your thoughts and if he discovers that you have bad intentions he will finish you off. 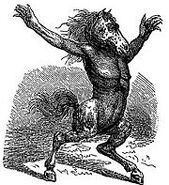