Monster in My Pocket Wiki
Register
Don't have an account?
Sign In
Advertisement
in: Monsters, Series 1, 10 Points,
and 7 more

Red Cap is monster #25 from the Series 1 figures.

The Red Cap comes in all four original colors, as well as the four neon colors. A ten-point monster, the Red Cap is depicted with his cap, holding up his knife.

Habitat: Lives in abandoned castles on the borders between Scotland and England

Perhaps the most wicked of all evil faeries, Redcap is a little old ugly man with fiery red eyes, bad dental work, and long fingernails. He lives alone in old castle towers where evil deeds once took place. Wearing iron boots and a rust colored cap, Redcap stalks the countryside, attacking unfortunate travelers (he's especially fond of redheads and rednecks)! After killing them he dips his cap in their blood, turning it bright red in color. You can scare Redcap away with a cross. When he sees this, he will let out a loud scream and run away, leaving behind one of his long sharp teeth.

Red Cap is a monster in the class "The Humanoids." He is monster #10. Red Cap wears ragged robes and a pointy hat dipped in blood. He also holds up a large sword. His total card points value is 217.

Red Cap is a little old ugly man with fiery red eyes who haunts old castles between the border of Scotland and England. After killing unfortunate travelers with his iron claws, he dips his cap into their blood, turning it bright red.

Red Cap appears as a normal enemy in the Monster in My Pocket video game. They reside at the Crane Tower, sliding down the tower and attacking the player. However, they are easily disposed of, and only appear in that one level. 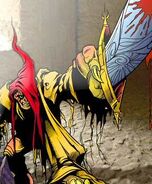