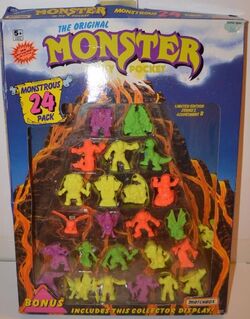 The original series of Monster in My Pocket hit the shelves in 1990, produced by Matchbox. Forty-eight monsters were in the original series, and four different colors -- red, yellow, green (light olive) and purple. Four neon colors were added later:neon-green, neon-yellow, red-orange, and violet. Premium colours, available with such items as the board game, included pink, neon orange, blue, pine green, a brighter neon green (similar to that of Series 2 figures) and glow-in-the-dark white. The forty-eight original monsters were used for the comic books, cartoons, and video game, with some additions. Each monster had a points value, representing the monster's relative power and the figurine's scarcity. These ranged from five to twenty-five points. The figurines were released in single packets (with an appropriate Battle Card), four packs (usually comprising lower value monsters), 'Secret Twelve Packs' (in which only a single, 25-point monster was visible without opening) and a 24 pack, the packaging of which functioned as a basic display case.

The series proved particularly popular in Europe and the United Kingdom (some of the later lines only had European releases), and had a later distribution in Latin America. However, the series did cause some controversy in the United Kingdom due to its representation of the Hindu deity Kali as a monster. Similar problems arose with following series, which featured further deities as monsters - Ganesha, Hanuman and Yama. Public outcry from the Vishva Hindu Parishad led to these monsters being recalled from later rereleases, with the exception of Yama. Other than this, the first series was particularly popular in the UK.

Releases in other countries included a number of unusual colours. Italian releases came in blue, orange-red, yellow, neon green and gold, while Mexican, Argentine and Peruvian figures included a large array of colours including black, white and clear. Argentine and Peruvian figures tended to be of a lower quality than the European and North American releases.

Legend of Monster in My Pocket

"Now you can collect the greatest REAL monsters of all time and, best of all, they'll fit in your pocket. Since the beginning of time, man has battled Monsters and great Monster Legends have existed in every culture. Now you can learn the facts about the greatest REAL MONSTERS of all time. This information has been carefully researched and each monster's point value is based on their intelligence, strengths, weaknesses, speed and range. The more you know about these Real Monsters, the more fun it is to collect, trade and play with them."