Monster in My Pocket Wiki
Register
Don't have an account?
Sign In
Advertisement
in: Monsters, Series 1, 5 Points,
and 9 more

Spring-Heeled Jack is monster #45 from the Series 1.

In many incarnations of the franchise, Spring-Heeled Jack appears as the right-hand man to the villainous Warlock.

Spring-Heeled Jack comes in all four original colors, as well as all four neon colors, plus a rare pine-green premium edition. A five-point monster, Spring-Heeled Jack is depicted in a stance where he is about to jump into the air.

The original "Jumping Jack Flash," this English monster has always been known to terrorize residents of London by jumping in front of his victims, frightening them half to death, and then disappearing with great leaps and bounds. Spring-Heeled Jack wears a strange shiny suit, shoots blue and white flames from his eyes and will rip his victims clothes with his sharp claws. He then jumps hundreds of feet into the London fog before anyone can catch him. This evil boogeyman was once cornered high on a church spire where he lept into the darkness, never to be seen again. Too bad. It turns out he was being chased by a shoe company who wanted him to endorse a new sneaker line "Air Jacks."

In the Monster in My Pocket comic series, Spring-Heeled Jack is, much like in the video game, a member of the evil monsters. Along with Medusa, Spring-Heeled Jack is Warlock's most trusted ally. In the comics, he is able to create the illusion of what someone fears the most. He uses this against a young girl, Theresa, who bought a doll-house the monsters lived in. However, rather than a monstrous, frightening illusion, he merely has to conjure up the illusion of her father, which saves the monsters from being tortured by the girl any longer.

Spring-Heeled Jack appears as a boss monster in the Monster in My Pocket video game. The first boss the player faces off against, in the Crawlspace (Stage 1, Area 3), Spring-Heeled Jack hurls himself into the air and throws three daggers in a fan pattern. He takes a short rest after every three jumps. Although he is eventually defeated, he returns at the end of the game in Monster Mountain, once again attacking the player, though he has the same moves as before.

Spring-Heeled Jack needs to be hit 17 times before being knocked down. His description in the instructions manual reads: "Bounces around while throwing sharp knives at you."

Monster in My Pocket: The Quest

Spring-Heeled Jack is one of the Evil Monsters in the defunct CGI-series Monster in My Pocket: The Quest, as an ally of Morlock (although his concept art lists him as one of the "Good Monsters"). As the show was canceled before airing, there is very little information about it. 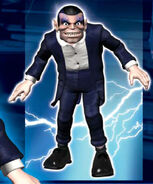