Super Scary Howlers are a range of light-and-sound featuring figurines that were released alongside the Super Scary Series 4 range.

The range consisted of four figures, each representing a previously released monster. The monsters were Vampire, Werewolf and The Monster from Series 1, and Swamp Beast from Series 2. The monsters were seemingly only labelled with the Super Scary banner due to being released alongside this series - none of the four originated with the Series 4 characters. It is likely that the four monsters were chosen becuase they were prominent characters in the animated series pilot, The Big Scream.

Each Howler figure was approximately five inches tall, standing apart from the much smaller figurines in the main range. The figures were made from a semi-hard moulded plastic, with a hard plastic head with two LED eyes. A button and a speaker grill were located on the base of the figurine; when the button was pressed, the figure's eyes would light up, and it would emit a sound. The Werewolf produced a howl, the Vampire a cackling laugh, the Monster a low rumbling growl, and the Swamp Beast a bubbling grumble. Each figure was sold seperately, in a blister pack. Although the Howlers were the approximate size of a standard action figure, they featured no articulated parts. 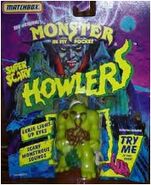