Monster in My Pocket Wiki
Register
Don't have an account?
Sign In
Advertisement
in: Monsters, Series 1, 20 Points,
and 13 more

Triton is monster #10 from Series 1. He was later redesigned for the 2006 relaunch series.

Triton is a twenty-point monster that comes in red and yellow from the original colors, plus all four neon colors and rarer premium neon orange and pink editions. Within the 12-packs of monsters comes a sheet which shows a picture of all of them and their names and information. Triton is pictured with a trident, though the actual figure does not have it. He is depicted as a mer-man with a long beard.

Habitat: In the depths of the Mediterranean Sea

Faster than a speeding Jet Ski, more powerful than a nuclear submarine, able to leap the tallest waves with a twist of his flipper...it's a duck, it's a flying fish, no, it's Triton - master of the ocean! Half human and half fish, Triton cruises across the ocean in a chariot, powered by a team of dolphins. He carries with him a magic conch (seashell) which, when blown like a trumpet, can command the seas to become calm or churn into a stormy rage. Even landlubbers are not safe from Triton, as he can change his tail into legs and come ashore to create havoc. So next time you're at the beach or out fishing and you hear a distant horn, head for the hills - Triton may be biting!

Triton is a monster in the class "The Sea Monsters." He is monster #44. Triton now wore a helmet and wielded a conch, and had lost his beard. His card has a total points value of 181.

Triton, the son of Poseidon, King of the Seas, is known for his magical conch shell that he plays like a trumpet. With his shell horn, he can calm the sea or create deadly storms. This half-fish, half-man can also blow a signal to sea creatures of approaching hostile human enemies.

Triton is one of many monsters seen on Monster Mountain during the assembly set up by Vampire and Warlock.

Triton appears as an enemy monster in the Monster in My Pocket video game. He is found in Stage 3, Area 2, in the sewers. He jumps out at the player in attempt to destroy them. 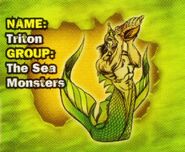