Monster in My Pocket Wiki
Register
Don't have an account?
Sign In
Advertisement
in: Monsters, Series 1, 25 Points,
and 8 more

Tyrannosaurus Rex is monster #6 from Series 1 and monster #145 from Series 6. It was the first monster name to make a second appearance in the series.

The original version of Tyrannosaurus Rex is depicted as a Godzilla-like figure, with an upright stance, large, muscular arms, and a deep face with a snarling mouth. The skin has a scaled detailing. Its points value is 25, and it was available in green and purple original colours, plus all four later neon colours, and in rarer pine green and neon orange editions.

Tyrannosaurus Rex or "T.Rex" as his friends call him, is the king of dinosaurs. He lived in prehistoric times and was thought be just another old fossil until he was reawakened by a violent earthquake on his remote Caribbean island. Rising from the ocean, he uses his giant stubby legs to kick over anything that gets in his way, and his enormous "Whale Tail" can clear an entire acre of land with one wag. Taller that most buildings, this amphibious creature doesn't mess with eating people, he eats whole cities, (and usually a suburb for dessert)! It's no wonder this entire species became extinct millions of years ago - They probably couldn't find anyone to play with!

In Series 6 - the Dinosaurs - Tyrannosaurus Rex was recreated more in keeping with the real animal. This version has the large, long head, tiny arms and long tail associated with the creature. It is depicted in an upright stance, its tail dragging along the ground, as was common in earlier reconstructions of the species; modern reconstructions show the creature holding its head and tail out roughly parallel, its back straight. Tyrannosaurus Rex was the first monster of Series 6, and had a points value of 150.

Another version of the figure was released as one of the four Dinosaur in My Pocket Kids' Meals giveaways. This figure was similar in appearance to the main Series 6 version, but in a single colour, like the Series 1 toy. Like the main Series 6 release, it had a point value of 150. This makes Tyrannosaurus Rex the only monster to have had three versions released throughout the MIMP range, with the exception of the four monsters in the Super Scary Howlers range. 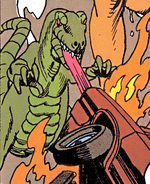 Tyrannosaurus Rex made two appearances in the Monster in My Pocket comic series. His first appearance was in the initial Monster Mountain scene in Issue 1, where the distinctly Godzilla-like T. Rex was seen to tower over all the other monsters present. He had a more significant role in the strip 'Destroy All Monsters.' In this, the miniaturized T. Rex fed his hunger for radioactive materials by eating phosphorescent glow putty, causing him to increase in size and terrorize Jack Miles and his brother Tom.

In chapter two, 'War of the Monsters,' his rampage continued, and , despite the best efforts of Jotun Troll, Vampiress, the Phantom of the Opera, Hobgoblin, the Invisible Man and the Monster, absorbed microwaves and devoured a radioactive source in a smoke alarm, causing him to increase yet further in size. Finally, in chapter three, 'Swamp Beast, ' the eponymous swamp monster himself grew to enormous size and defeated the T. Rex.

Tyrannosaurus Rex's fact-file describes him as having "immeasurable strength," and the ability to produce "super-heated plasma from his mouth, known as atomic breath." Golem describes him as "The King of the Monsters, and perhaps the most powerful creature to ever walk the face of the Earth!" (Although the Great Beast may have something to say about that.) T. Rex doesn't appear to be allied with the Warlock's evil monsters, but rather an unaligned force of destruction.

Tyrannosaurus Rex is the first enemy that appears in Stage 6, Area 1.

The video game takes liberty with the monster, giving it a cone of fire breath. The instructions manual description of the creature reads:

Tyrannosaurus Rex is briefly seen in the opening for the animated special, The Big Scream. He is among the prisoners held in Monster Mountain and guarded by Dr. Henry Davenport and his allies. 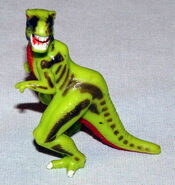