Monster in My Pocket Wiki
Register
Don't have an account?
Sign In
Advertisement
in: Series pages, Series 3 monsters, Unreleased monsters

The Unreleased Monsters are a selection of characters for which some information exists, but which do not seem to have ever been made into figures. Monsters 82 to 96 would have been part of Series 3, had they been released, but it seems that no figures were ever produced. Nonetheless, some information does exist regarding these elusive critters.

The Argentine Cromy sticker book and Mexican cards lists 96 monsters, including all from Series 1 and Series 2, and the known monsters from Series 3, plus, unnumbered, fifteen that would fill the gap between the known Series 3 and the beginning of Series 4. In alphabetical order, they are Achelous, Ankou, Banshee, Catarenha, Djinn Shapeshifter, Genie, Grendel, Hairy Boggart, Headless Man, Heiracosphinx, Hodag, Jabalius, Sciapod, Talus and Troll. Of these, Troll made a brief appearance in the Monster in my Pocket comic. Ankou is another name for the spirit known as Grave Watcher, later released in Series 4. Sciapod appeared in a poster spread in the comic, alongside several Series 2 characters, and another new monster, Bash Tchelik. (Information from Scott Andrew Hutchins, via www.raumhafen.de)

Other editions of the cards refer to Jabalius as the Beast of Gévaudan and Catarenha as "Guardian of the Gold."

Since there are no further free spaces for these monsters between the known releases, it is possible that they planned for an abortive fifth series, which was never produced and was replaced by the Super Creepies.

Information on the Unknown Monsters remains scarce and contradictory. 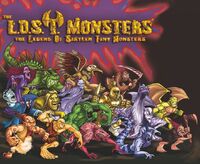 However, the Kickstarter failed to reach its $35,000 goal which led to the cancellation of the project.