Monster in My Pocket Wiki
Register
Don't have an account?
Sign In
Advertisement
in: Stubs, Monsters, Series 1,
and 13 more

View source
This article is a stub.
You can help the Monster in My Pocket Wiki by expanding it.

Vampire is one of the few monsters to have appeared in every incarnation of the Monster in My Pocket franchise, and has been depicted both as a heroic monster and a major antagonist.

Vampire is valued at 10 points and comes in all available colors.

One of the more famous monsters (having appeared in several movies), the Vampire is a creature who exists somewhere between the living and the dead. By day, he rests peacefully in his coffin. By night he is transformed into a blood thirsty monster. He usually appears in his designer outfit with matching cape, but will sometimes disguise himself as a bat or a wolf when he sneaks into his victim's bedroom - usually that of a beautiful young woman - and with his long sharp fangs, gently bites her in the neck and sucks her blood. To scare a vampire off, you must use a cross, garlic or a slice of pepperoni pizza with anchovies!

Vampire appears as a aristocratic man wearing a top-hat and purple cloak. He is monster #11 and part of "The Humanoids" classification. According to his collectable card, Vampire is worth 159 points.

A Vampire is physically very powerful and needs blood for survival. He hypnotizes his victims and then sucks their blood. During daylight hours, Vampires live in coffins in Transylvania. They can be destroyed by sunlight and only come out at night.

Vampire appears as one of the two playable characters in the Monster in My Pocket video game, the other being The Monster.

His entry in the instructions manual reads: This toothy terror blasts enemies with an energy wave from his fingertips. (But he'll never get close enough to put the bite on them!)

In The Big Scream, Vampire was the leader of the villainous monsters and archenemy to Dr. Henry Davenport. Vampire managed to escape from Monster Mountain using a magic potion, and teamed up with Medusa and Swamp Beast in order to regain his full size and powers.

In the cancelled animated series Monster in My Pocket: The Quest, Vampire was once again portrayed as a villain. He was the brother of Vampiress and worked for Morlock.

In the upcoming animated series by Cyber Group Studios, Vampire is one of the several monsters to appear in the series. 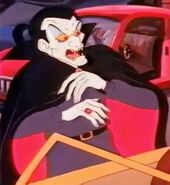