Monster in My Pocket Wiki
Register
Don't have an account?
Sign In
Advertisement
in: Monsters, Series 1, 10 Points,
and 10 more

View source
watch 01:36
We're Getting Mutants in the MCU - The Loop
Do you like this video?
Play Sound

Vampiress comes in all four original colors, as well as all four neon colors. A ten-point monster, Vampiress is depicted with a seductive stance, her hip curved upward.

Habitat: Lives in a coffin in Transylvania

As a result of strong bloodlines with the male Vampire [#33], the Vampiress depends on a constant supply of unsuspecting "blood donors" to preserve her eternal youth. Sometimes disguised as a bat, black cat, or bloodhound, she prowls the night in search of her next victim, using her sharp fangs to pump their plasma! The Vampiress is a striking creature with her red eyes, matching dress and long sharp fingernails, which are also red - painted from her victim's blood. The only safe place to see this brutal, bloodsucking brunette is in front of your TV - as she often moonlights as a hostess on the late night "Creature Feature!" 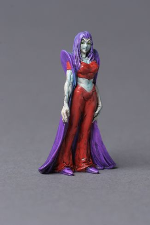 Vampiress is a monster in the class "The Maniacs." She is monster #27. Vampiress received a complete makeover for the 2006 relaunch, she now had a more gothic look to her, wearing a long purple cloak, a sharp red dress, purple hair, pale skin and menacing yellow eyes.

Centuries old, Vampiress stalks the night and shuns the daylight in search of fresh, red blood which she sucks from the necks of her victims! When cornered, she can change into a bat or a she-wolf but this makes her no less dangerous. Beware! Don't let this vamp near your neck!!

Vampiress, bundled with Poltergeist was only available with the Haunted Mountain Playset in UK stores. She and Poltergeist became more common when the 2006 series was brought outside of the UK, where they were now sold in regular 4-packs of monsters.

Vampiress played a prominent role in the Monster in My Pocket comic series. Although depicted with green skin, much like Medusa, Vampiress was a member of the good monsters alongside Vampire. Strong-willed, she refused to be given orders by humans such as Jack Miles. She was also shown as being quite intelligent, participating in the mission to stop the Tyrannosaurus Rex from wreaking havoc. She seemed to have the power to turn into a smokey mist, which she used to aid her teammates.

Seemingly taking over Vampire's role as the protagonist (while Vampire became an antagonist), Vampiress was to appear in the defunct animated series Monster in My Pocket: The Quest. She was to appear alongside the good monsters with Warlock and The Monster. As the show was cancelled before airing, there is very little information about it. 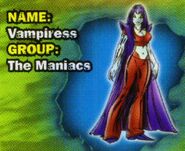 While both Vampire and Vampiress are included in the 2006 line, they are for some reason placed in different groups. Vampire is put in "The Humanoids" which makes sense as Vampires are humans that feed on other's flesh to make into their servants, however Vampiress is instead placed in "The Maniacs" which is monsters and entities that have either physically or mentally deranged into their own form. A Vampiress by definition is a female that has become a male Vampire's servant after being bitten by him. While Vampiress' have the abilities of male Vampire's, their "body alteration" from human to vampire may be why Vampiress is marked under the maniacs instead of the humanoids, as their existences come from different monster breeds.