Monster in My Pocket Wiki
Register
Don't have an account?
Sign In
Advertisement
in: Monsters, Series 2, 30 Points,
and 6 more

Warlock is monster #51 from the Series 2 figures.

With a points value of thirty, Warlock was available in all four neon colours. The Warlock is depicted as a man in evening dress, holding a cane in one hand and wielding a ball of magical energy with the other.

Habitat: Dark places around the world

This famous character owes his powers to a magical necklace. He disguises as an animal to attack his victims. The only way to defeat him is by placing a mirror in front of his face. So the curse is reflected on him or he gets scared to see another warlock.

In the comic, Warlock was the leader of the evil monsters as in the video game. The relationship between Warlock and Vampire, leader of the good monsters, has been likened to the X-Men's Magneto and Professor X.

In the video game version, Warlock was the main villain and the final boss. He first appears in the opening sequence, interrupting Vampire and the Monster watching television. He taunts the heroes, then sends his minions to destroy the pair.

Warlock was one of the main characters in the planned series Monster in My Pocket: The Quest. Unlike his former depictions, this Warlock was a heroic sorcerer who battled his evil brother Morlock. As the show was cancelled before airing, there is very little information about it.

Warlock is the primary antagonist for the upcoming animated series. He is described as "a sorcerer practicing black magic who wants to dominate the world." 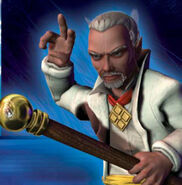